Project Buffalo is an alternative reality game that asks players to become digital archeologists as they comb through websites and discover the story of a group of CU students in 2000 who were working together to investigate the suspicious Department of Paranormal and Extraterrestrial Studies. The project features three websites and a podcast.

While approaching our Capstone project for the Creative Technology and Design program at the University of Colorado Boulder, our goal as a team was to create an alternative reality style game that could be played completely online due to the COVID-19 pandemic. We hoped to create an experience that would lessen the quarantine blues and create connections between inquisitive individuals.

The game asks players to become digital archeologists as they discover the story of a group of CU Boulder students who formed the AURA Club versus the suspicious Department of Paranormal and Extraterrestrial Studies. The primary playspace for Project Buffalo is two websites, auraclub.org and cu-dpes.com. Players work their way through puzzles and ciphers to uncover the fictional story and the fate of the AURA Club members.

To promote the game, these links were posted throughout CU Boulders campus on posters, sent in Zoom lectures, promoted on Twitter and Reddit through fake profiles, and discussed in our podcast Unexplained Boulder (which was specifically created to promote Project Buffalo). We encouraged the use of a Discord Server that we created to facilitate collaboration between players. With 14 puzzles, two websites (plus a secret admin page), and thousands of words of content, we created a short virtual escape room that draws on tropes from other alternative reality games.

Overall, the response was wonderfully positive as players made their way through the AURA Clubs meeting minutes, found secret locked sites, and worked their way through the game. In our first three weeks, we had 3.6K website views and 308 unique players which we took to be a resounding success. To reward our dedicated players, those who completed the game received a special Discord role as well as some physical stickers and pins for the first few to finish. This experience we hope brought smiles to our players and promoted curiosity.

If you'd like to play the game yourself, come on in! The best place to start is the AURA Club homepage. Alternatively, Episode 3 of the Unexplained Boulder podcast is where we introduce the game in the last 60 seconds of the episode. Feel free to join our Discord if you want to ask for help!

I am currently working as a game design intern remotely for Tastypill over the summer. Regardless I am always happy to chat about your game or project, and am open to providing feedback for resumes and cover letters! 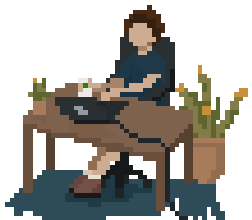